On June 11, 2022 the Montana Fire Fighters Memorial added four names to the wall. These heroes will be forever in our hearts and minds.

Ian McBeth was a C-130 pilot with the Wyoming and Montana Air Guard, completing multiple firefighting missions across the United States and serving in the private sector fighting wildland fires.

Ian’s childhood was quintessential (He would have hated that word, but it means the pure and essential essence of something.) of a small ranching community, fostering love of animals and reverence for hard work. A standout athlete at Wray High School in Wray, Colorado, Ian earned 11 varsity letters in football, wrestling, and track. He was a mainstay of the 1993 State Championship football team and a perennial placer in the state track meet at 1600 and 800 meters. Ian was known for his humor and hijinks and his toughness, determination, and skill, a theme repeated throughout his life.

At the University of Wyoming, Ian ran track, earning WAC Academic All-Conference. He earned several academic honors and graduated with a M.S. in Range Management. He was the main character in many adventures where he acquired the title “The Instigator,” a nickname used throughout his life.

Ian’s love of adventure and service to others led him to the military. Enlisting in the Wyoming Air Guard in 1996 as a construction specialist, he was later commissioned as a C-130 navigator and pilot. Over his career, Ian completed multiple combat deployments to Iraq and Afghanistan. In 2013, he joined the Montana Air Guard, becoming a pivotal part of the 120th Airlift Wing’s conversion from F-15 fighters to C-130s. A patient instructor who held his fellow airmen to his own high standards, he is remembered for his incredible competence as a pilot, teacher and evaluator, his unbounded humor, and a constant twinkle in his eye.

Ian’s first passion in life was his family. He and Bowdie had three beautiful, clever, and adventurous children. Abigail, Calvin, and Ella were his pride and joy and loved joining their father on whatever scheme he had cooked up, spending time outside skiing, hiking, camping, and kayaking. Ian dreamed up and executed family adventures with his parents, siblings, nieces, and nephews to the Black Hills, Fort Robinson State Park, Glacier National Park, the Delaware shore, and the Grand Canyon, to name a few. Uncle Ian was the main character in every trip’s greatest adventure, whether it was an overwhelming success or epic failure.

Ian lost his life in New South Wales, Australia, doing what he loved—flying and helping others. Ian’s death has reminded us of his passion for life, his service to others, and the dogged determination with which he faced any challenge.

On August 24, 2020, Tom gave his life in a helicopter crash while fighting fires in Oregon.

Anyone who knew Tom knew he was larger than life, both in stature (6′ 10″) and in everything he did. When God opened a door, he didn’t walk; he ran.

Tom was born and raised in Bozeman, Montana. He attended Mount Ellis Elementary, Mount Ellis Academy, and then played basketball for the Bobcats at Montana State University. As a sophomore, Tom led the Big Sky Conference in blocked shots and the team in 3-point field goal percentage. He did this while missing half the conference games because, as a Seventh-day Adventist, Tom observed the Sabbath from sundown Friday until sundown Saturday. Through that entire time, he kept God by his side and let Him lead wherever he needed to go. Tom was big, but God is bigger.

Tom was easy to like, with his big smile and infectious laugh. It was not uncommon to see Tom on the phone working through an employee’s personal life issue or talking to a new friend whom he met while working on his never-ending projects.

His dreams and aspirations were as big as he was. He built Excel Drilling from the ground up and not only made it into a very successful business but created another family of employees with relationships that will last a lifetime. He bought the Bozeman Hot Springs with dreams and an action plan already in place. The outside oasis at the hot springs is the realization of his dream because of his endless research, passion, grit, and drive to make a dream reality.

Even before all that, his family and friends were his world. His greatest accomplishment was being a father to his three beautiful children. His wife, Robyn, worked by his side for 18 years in every adventure he went on. His best friend was his father, who taught him to be the man that he was. For someone who didn’t like to talk, Tom never shied away from being there for his friends who became his brothers.

Greater love has no one than this, that he lay down his life for another. John 15:13

He is survived by his wife, Robyn; children, Cohen (11), Sawyer (9), and Makenna (7); parents, Mark and Pam Duffy; sister and brother-in-law, Ashley and David Bowen; brother and sister-in-law, Tyler and Jackie Duffy; grandfather, Jack Larrabee, and his wife, Cathy; and numerous aunts, uncles, cousins, nieces, and nephews.

The U.S. Forest Service has confirmed the death of wildland firefighter Tim Hart while fighting a fire in New Mexico.

Hart, a USFS smokejumper, died from injuries sustained on May 24 while responding to the Eicks Fire in Hildago County, New Mexico.

In 2009, he joined the Shoshone National Forest as a Lead Forestry Technician on an engine and in 2010 detailed to the Asheville Interagency Hotshot Crew as a Lead Firefighter.

Hart also worked for the Bureau of Land Management on the Ruby Mountain Hotshot Crew before joining the smokejumper program in 2016 and relocating to Grangeville, Idaho as a Rookie.

Hart continued his wildland firefighter journey in West Yellowstone, arriving in 2019 as a Smokejumper Squad Leader, then in 2020 as a spotter. 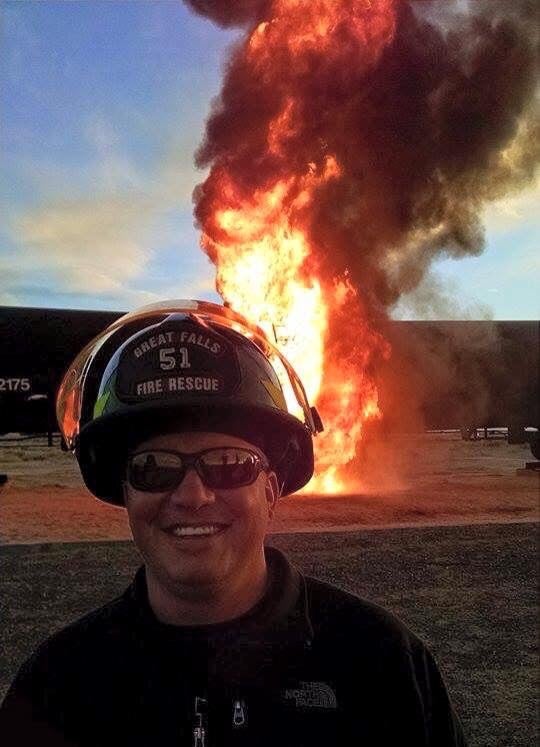 Great Falls Fire Department firefighter Jason Baker died on February 20, 2019 after a two-year battle with lung cancer. He was 45 years of age at the time of his death.

Baker began his career as a wildland firefighter in the Seeley Lake area during a summer break from the University of Montana. He became a volunteer firefighter, and then found a job with the Great Falls Fire Department in 2000.

Baker worked for more than a decade to help firefighters statewide achieve presumptive health and safety coverage so generations of first responders tagged with lung disease and other serious work-related health conditions would have better odds at living a normal life.

Baker is survived by his wife, Jill, and their two children.

Jason was instrumental in getting Senate Bill 160 into law.

The bill signing ends a 20-year fight for firefighters’ workers’ compensation claims to be presumed valid if they’ve served a certain number of years.

Under the new law, insurers can only deny a claim if they prove that a firefighter wasn’t exposed to enough smoke or particles to have caused the illness.

The law takes effect July 1. Montana was only one of a handful of states without a so-called “presumptive law.”

“Today every firefighter should know Montana has your back and it’s about damn time,” Bullock said during a signing ceremony outside the state Capitol.

Presumptive diseases are defined in the bill as those contracted through work. They include myocardial infarction, colorectal cancer, mesothelioma, non-Hodgkin’s lymphoma and cancers of the esophagus, brain, lung and breast.

A firefighter must have between four and 15 years of service, depending on the illness, since 2014 for a claim to qualify under the new law.

Firefighters in dress uniform traveled from all around the state to witness the signing. Also in attendance was the family of Jason Baker, a Great Falls Fire Department engineer who died in February of stage 4 lung cancer.

Baker had become a rallying cry by supporters of a similar bill in the 2017 session that failed.

His wife, Jill Baker, said in a statement that her husband’s legacy will be his advocacy for improving firefighters’ health and safety.

Those tested by fire are the most likely to be refined into gold.